Today we used the second day of our bus tour to take a long boat tour from Westminster to Greenwich on the Thames. After our long traffic-delayed experience yesterday we were leery of the outcome of this decision. However, we ventured forth and were pleasantly surprised.

First, the long tour to Greenwich is 12 GBP each! We had it included in our tour price from yesterday, so that felt good. The clincher was that the trip itself was great. All of the historic and architectural sites look far different (and in most cases better) from the water than any perspective you get from dry land. The boatman’s commentary added spice to the viewing. We stopped for 30 minutes in Greenwich, enough time for us to eat our carried lunch in the sun atop the boat’s sundeck. Our view during lunch – the marker for the prime meridian! Not to be discounted was the fact that the river provides a constant cooling breeze on these hot days. It was a wonderful 3 1/2 hours.

Aboard the boat we befriended a family from Mold Flintshire, Wales. Conversation drifted into Welsh music via our disclosure of our honeymoon in Wales 25 years ago and my subsequent direction of Cor Cymraeg Seattle for several years. We had a wonderful time sharing talks of Welsh singing, traveling (they were just returning from Paris), and our enjoyment of London. Simon, Dawn, and Callum will remain in our memories…well met!]

Unfortunately I suffered a catastrophic camera failure before the boat departed, leaving me with only my smart phone for a camera. That’s one happens when one doesn’t read the screen telling you that the battery is failing. Anyway the only photos I got were with my trusty Samsung phone. Jean will have to provide more substantial photo coverage. Here are a few photos of the day, ending with a brief walk around the Houses of Parliament where the boat docked and our tube station was located.

The Shard, a very controversial building. Apartments (condos for us Yanks) are 45 million GBP!

Officially called Elizabeth Tower since last year, this is better known as the home of Big Ben. Big Ben cannot be seen in the photo. Rather than the clock, it is the bell that sounds the hour. 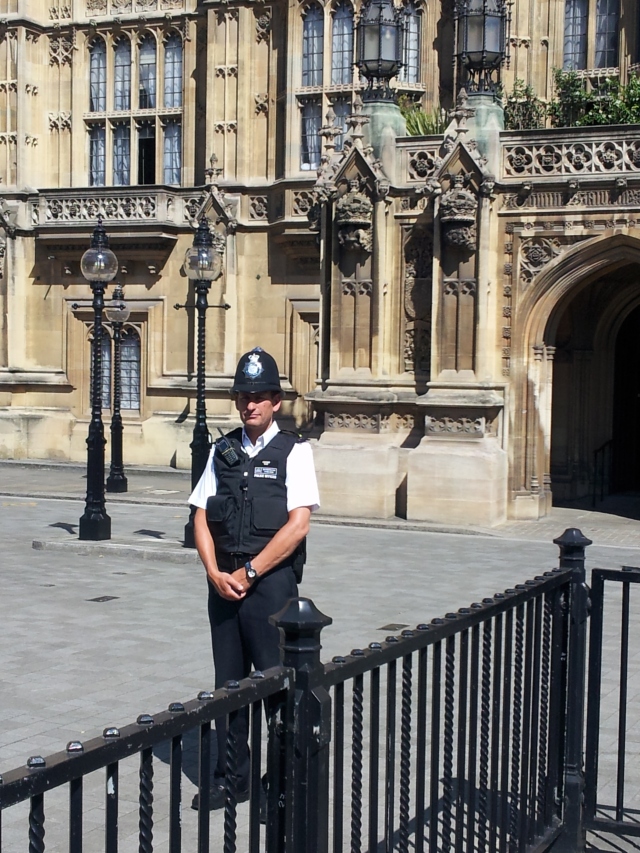 A London Bobby guards one of the doors of the Houses of Parliament.

Jean and Paul at Parliament 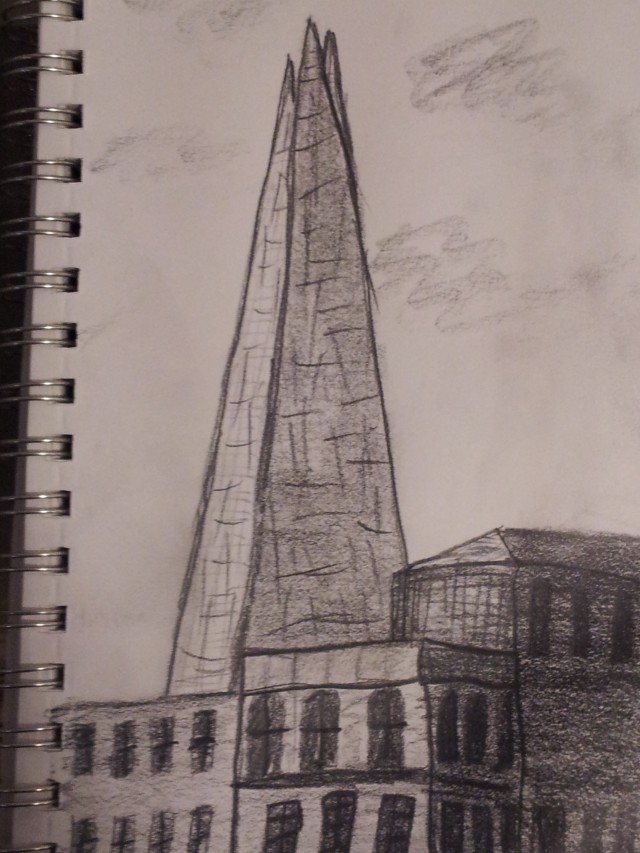 I'm retired, but working at painting, photography, and song writing. We like to travel and paint plein air in new places. Of course that's also where photography comes into the picture, so to speak. Sometimes I get inspired to write songs about the people and places we visit.
View all posts by Paul →
This entry was posted in Art, Photography, Travel and tagged Greenwich, London, Prime Meridian, River Thames. Bookmark the permalink.

3 Responses to A Day Well Spent