Thursday night we attended a wonderful jazz concert that was a tribute to Django Reinhardt. Django Revisited Big Band played two sets of music arranged for a big band. Twenty musicians filled the stage and hall with music! Lois Coeurdeuil is an accomplished guitarist who has played Django Reinhardt’s music for many years. However, this was usually in a small ensemble as it was originally performed. His dream was to adapt this music to the big band sound. He collaborated with band leader Romain Thivolle to build a band of extraordinary musicians and create a repertoire of Django’s music like you’ve never heard it before.

Here are some links to their work:

This what they looked like on stage Thursday night. 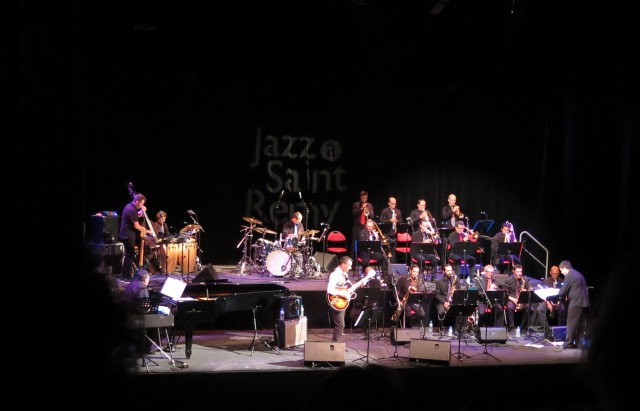 We arrived an hour early because we were unsure about parking and found an almost full parking lot! A pre-concert party was in full swing with wine, canapes, and a small jazz combo playing on the performance hall patio. We found some chairs and listened to the music for a hour before the concert. The Alpilium is a unique performance hall that has only been in use for 3 years. The seating is comfortable, the sound excellent, and the season’s listing of concerts quite impressive.

What an exciting evening!

I'm retired, but working at painting, photography, and song writing. We like to travel and paint plein air in new places. Of course that's also where photography comes into the picture, so to speak. Sometimes I get inspired to write songs about the people and places we visit.
View all posts by Paul →
This entry was posted in Music, Saint-Remy-de-Provence, Travel, Uncategorized. Bookmark the permalink.

1 Response to Jazz in Saint Remy