Yesterday we took a stroll around town. It was a warm day, but a bit overcast. The streets are full of people because it is a weekend and Collioure is a popular get-away. However, we were able to find some empty spaces in the small back streets. 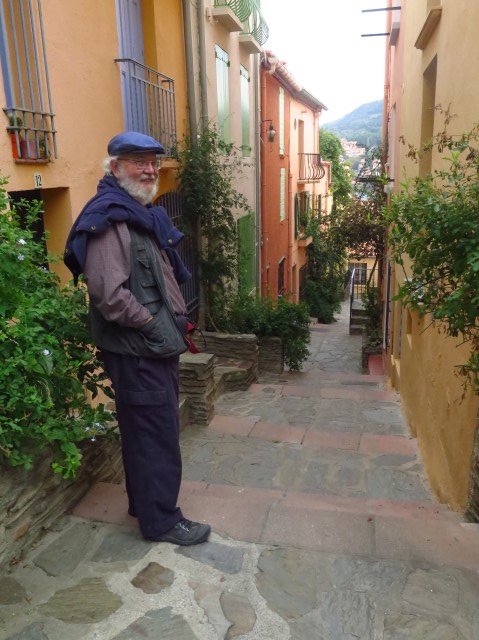 We sat on the quay for a time to watch the people and boats. Much to our surprise our new found friends from our hike to the windmill, Marie and Jean-Marie, walked down the beach. Jean called to Marie and they joined us for another crazy conversation bouncing among English, French, and Spanish to communicate with each other. What a fun couple! We learned that Marie was born and raised in the small town near Les Orgues where we visited on our previous post. Jean-Marie was from Prades, a larger town not far from there. Although they live near Toulouse, they make it a point to return to Catalonia where they feel at home. We have each made a commitment to learn the other’s language better and meet again on our next trip to France. Jean-Marie has promised to share some great paella with us.

Marie told us she had been watching an artist sketching on the beach near us. She was quite impressed by the drawing. Within minutes a woman approached and Marie greeted her. This was the artist – Sylvie Batlle! She was born and raised in Collioure, but lived in England for 20 years. Therefore, the communications became easier. Sylvie is an art therapist as well as fine artist. The five of us chatted for a bit and then Sylvie invited us to come to her atelier to see her work.

Sylvie’s atelier, Grain de fable, is in the same small shop that her parents ran as a take-out eating place when she was young. The basement kitchen has been converted to her studio. Her mother was tending the shop when we entered and called Sylvie up from the basement when we asked for her. If you click on the link above you will get to a page with some of her paintings at the bottom of the page. Click on the small images to see enlargements. This is a small portion of what she has in the atelier. Her work varies from figurative and realistic to abstract. Every piece has a liveliness that captures your interest. The abstracts are mostly done with a base of sand mixture to create texture and then painted over with either acrylic or oil paint.

Sylvie is another of the amazing artists we have met on this trip. Her warmth and passion for creativity are an inspiration.

I'm retired, but working at painting, photography, and song writing. We like to travel and paint plein air in new places. Of course that's also where photography comes into the picture, so to speak. Sometimes I get inspired to write songs about the people and places we visit.
View all posts by Paul →
This entry was posted in Art, Collioure, Friendship, Retirement, Travel and tagged Collioure. Bookmark the permalink.